Today we visited our office in Islamabad and got to meet all of our employees there for the first time. We slept last night from around 4:30 AM to around 2 PM local time, and Raheel and Nabeel (our number two in command here) came to pick us up around 3 PM. During the 10-minute ride to the office, I recorded some of the amazing sights we saw along the way, from sleeping checkpoint guards, to children selling toys in the intersections. I even recorded a little girl staring into our car at Bryan for almost a full minute.

When we made it to the office, we found our management team waiting on the steps for us with video cameras; everyone was so excited to see us and shake our hands. We were given the grand tour of the office before the developers arrived for their shifts and then waited in the lobby to greet everyone as they came in to start the day. Since we came over mostly unannounced, everyone was shocked to see us standing there and greeted us with lots of smiles and excited conversation. 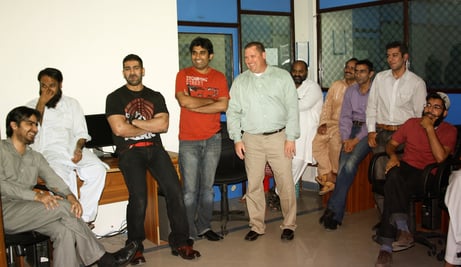 After we greeted everyone and allowed them to go to their computers to begin working, we began our executive level meetings. After several meetings, we were taken upstairs to the roof to see a bird’s eye view of Islamabad. There was an outstanding lightning storm to the North of us, and I watched in amazement at my surroundings.

Back in the office, it was time for our formal address to the entire company. We gathered all employees in one room where Raheel gave a wonderful introduction, sharing tremendous words about me and our company. After a thunderous round of applause, I addressed everyone with a heartfelt speech and thanked everyone for all the work they do for us and the admiral way in which they represent Pakistan every day by backing up our claims that Pakistani workers are loyal, dedicated, highly skilled and extremely respectful. I talked about how each of them is an ambassador to the United States, that their actions not only represent themselves and this company, but also all of Pakistan. I then turned it over to Bryan, and he too spoke from the heart about what it meant to work with everyone there and to be involved in such a multinational team. I ended the round of speeches with some jokes that I had one of the managers from our Lahore branch write to me in Urdu, mostly at the expense of the Islamabad managers. This was a huge hit, even if they may have been laughing more at my attempts to pronounce their language than the jokes themselves. 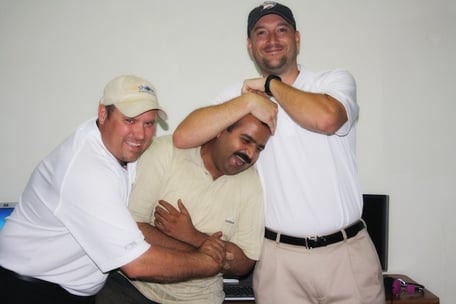 After that meeting, we had a short break and played a Ping-Pong match with two of the best Ping-Pong players in the company. I found out that I am terrible at that game compared to these guys! Finally, I wrapped up this evening with a round of one on one interviews, just me and the developers getting to know each other better. 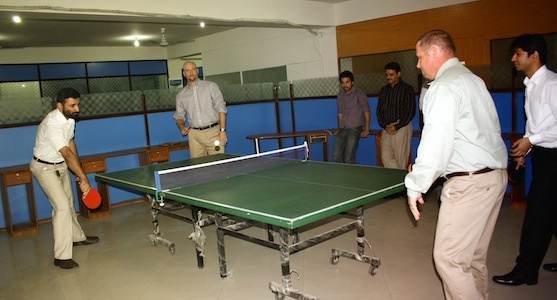 The reception we have received here fills me with immense joy—everyone is so amazed that we actually came here to visit. They all know how Pakistan is portrayed in the United States, and for us to have the courage to show up here has impressed and touched them deeply. Never in my life have people been so kind to me; every time I walk into a room, everyone gets off their seat and offers it to me and Bryan, and we have had so much food at our disposal that we are feeling like stuffed chickens! Anything we needed is here before we can even ask for it. So far my experience here has been absolutely amazing, and it has really opened my eyes even further about how genuine and kind Pakistani people really are.

Lastly, one other thing that really stands out to Bryan and me is all of the security checkpoints. We passed through seven security checkpoints tonight at 2:15 AM on our 10-minute trip to the hotel. And more interestingly, at each point when the police looked into the rear seat and saw two white people, they immediately waved us on. Raheel kept thanking Bryan and me for being with him because it kept him from getting harassed by the police! So apparently when the police see Westerners, they too give us full respect and courtesy.

I think the Thunder game is about to be televised here in Islamabad, they keep showing Kevin Durant commercials. GO OKC!!